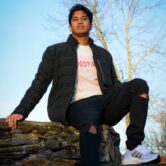 From humble beginnings as a child of immigrant parents, Ashwin Jacob worked hard to surpass all expectations of a predictable, mediocre life.

At 19 he broke into the entertainment industry, and by 27 moved to LA with less the $500 in his pocket. Less than a year later he was working with Fortune 500 companies such as NBC Universal, Disney, BMW, and Microsoft.

On his podcast, New Hollywood, he’s sharing the stories of insiders in the world of entertainment, technology, fashion, and business, in hopes of helping others achieve success and reshape their own “mediocre destinies”.

In Ashwin’s Online Success Journey, you’ll hear about how he journeyed to the path of success…