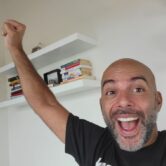 Shaahin Cheyene is the Founder, CEO and Chairman of the start-up Accelerated Intelligence. Cheyene shares his passion to accelerate intelligence through his latest company and products and is positioning the company to be the leader in the brain nutrition space.

Born in Iran, Cheyene is an award winning entrepreneur, writer and filmmaker currently based in Los Angeles, California. In the early 1990′s while still in his teens, Cheyene spearheaded the “Smart Drug Movement” by inventing and branding the original legal Herbal Ecstacy, which became a global phenomenon selling millions of units all over the world. In the early 2000’s Cheyene worked with several major pharmaceutical companies to bring the technologies and benefits of plant medicines to the mainstream.

In 2000 Cheyene invented, patented and developed a revolutionary new medicine delivery technology with the Vapir Vaporizer, which continues to sell millions of units worldwide, preparing Vapir for the public markets but subsequently selling it in 2006.

In Cheyene’s Online Success Journey, you’ll hear about how he journeyed to the path of success…

You can reach Cheyene here:

Patience’s Personal Coaching Course “Clarity: Our Journey to Success” that was mentioned on the podcast can be found here: