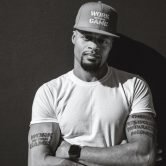 Blogging since 2005 and publishing videos to YouTube starting in 2006, Dre has published over 8,000 videos with his content being viewed over 73 million times. Dre’s daily Work On Your Game Podcast has over 3 million listeners.

Dre has given 4 TEDxTalks and authored 29 books.

In Dre’s Online Success Journey, you’ll hear about how he journeyed to the path of success…

Dre’s Free book, The Third Day can be found here: